An explosion that ‘shook houses’ and was ‘very loud’ has left one local resident injured in the early hours of 21st May.

Resident Demi Evans said she heard a “massive bang” and added that houses shook during the incident.

A police spokeswoman said the incident was caused by an electrical fault.

She said: “A small explosion, thought to have been caused by an electrical fault, was reported at a police station this morning.

“The incident happened at around 2.50am today (Monday, May 21) at Cotton Lane police station, Derby.

“Minor damage was caused to the police station and a nearby resident was treated by paramedics for minor injuries.”

She added that no police officers were injured in the explosion.

Electrical faults can be avoided through routine maintenance of your electrical installation. Fixed wire testing is a service that can be used to detail any dangerous areas and recommended improvements to your buildings electrics. 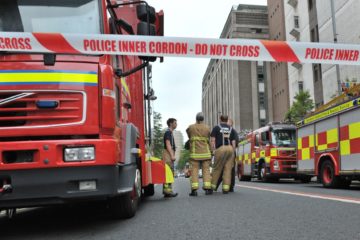 As Derbyshire Police and Derbyshire Fire and Rescue services attended an incident on East Street, most of the immediate area was closed off.            For public safety, an area of Derby city centre was cordoned from Read more…